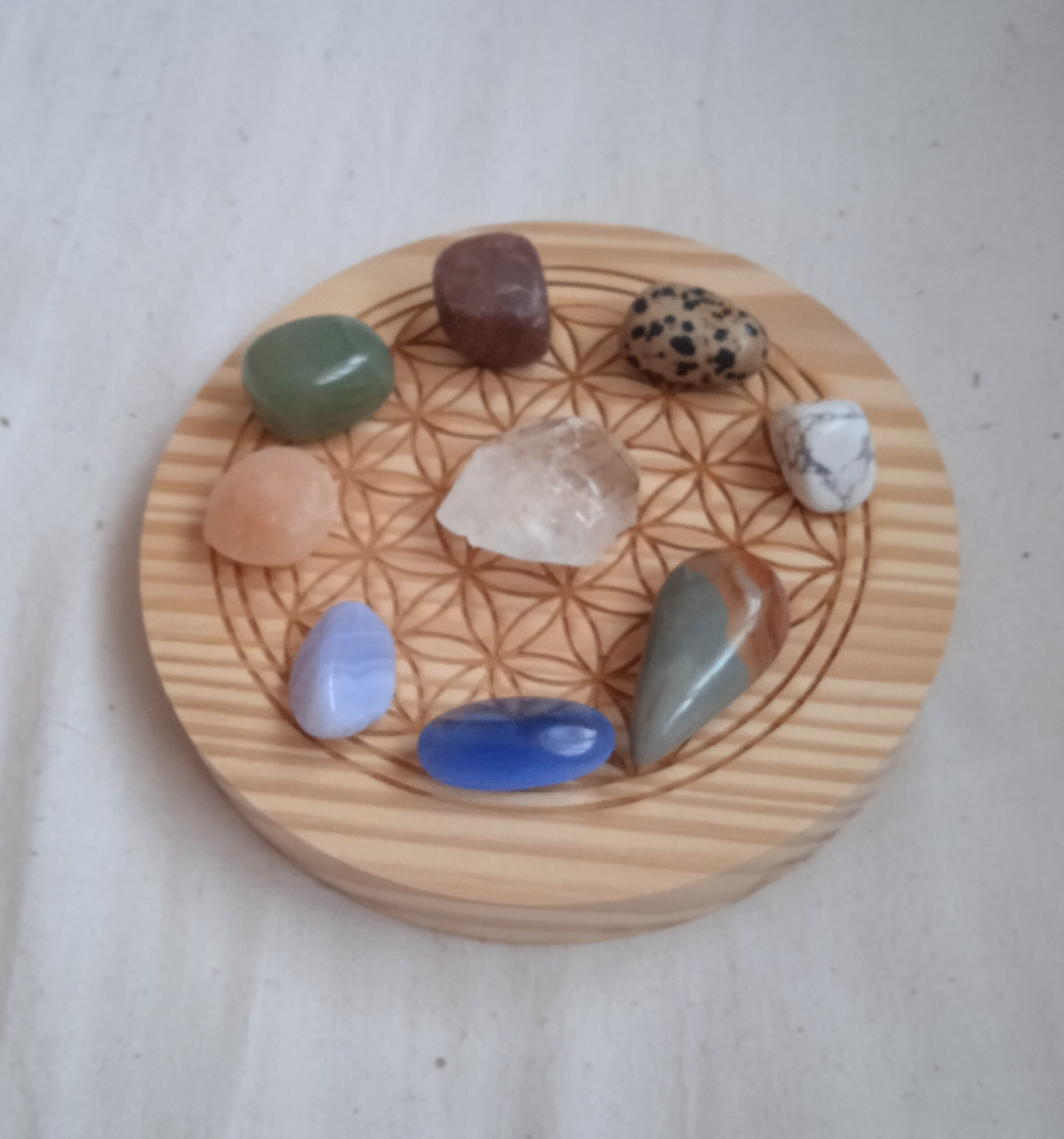 Called ‘the womb of the universe’ the Vesica Piscis represents the saying, as above, so below.

It’s the start of life, the circle of creation & manifestation.

The Vesica Piscis is made from two interlocking circles, from this the triangle, square, hexagon, Seed of Life & Flower of Life can be created.

A circle is the most powerful, yet simplest of forms, because it has no beginning or end & covers all possibilities.

Your eye is a natural Vesica Piscis.

When a sperm pierces an egg & conception happens, the egg separates into a Vesica Piscis, then creates the Seed of Life.

A symbol of oneness & harmony, the Vesica Piscis bridges the gap between the physical & spiritual worlds, it links the past, present & future.

Lay the grid upright to draw energy downwards, or lay it sideways to include or create energy.

The centre keystone/centre stone should represent your purpose.

Place your crystals from the top point down & place a keystone/centre stone in the centre, anchor stone placed in the bottom corners will ground the energy in place.

It is a symbol of completion & wholeness.

The loops represent the balance of opposites; light & dark, male & female & day & night; their ability to be able to completely change.

The lemniscate is made of two circles in the same plane, they are drawn with a continuous line to create a figure eight.

It can be used pointing upwards to draw energy to a central point, or placed sideways to create a continuous flow of energy.

The lemniscate is a good grid to use when you want to rebalance things, it can be used to place crystals on & around your body.

The grid cleanses & draws in light to fill the vacuum created from getting rid of toxic energy.

It can be used to bring two separate parts together, as infinity includes all time, past, present & future, centred in the now.

selenite on the top loop & put it over your heart seed, heart & higher heart chakras to sooth or stimulate your immune system.

The upward point of a pentagram represents spirit, while the other four points represent, earth, air, fire & water, it represents the descent of a spark of the Divine into tangible matter.

A pentagram is drawn with continuous lines in five straight strokes, creating a five pointed star.

A pentagram can be placed in a circle to increase the protection it offers.

Despite what people think, the pentagram has nothing to do with ‘black magic’, or the dark side. It is not the shape of the grid, but the intention that is set while it is being created that creates the energy, so if you are thinking positively when creating the grid, you send positive energy, the opposite is also true.

The pentagram has been used as a powerful source of protection, acting as a shield that defends the environment, home or wearer.

It is also traditionally used to attract abundance & prosperity.

An inverted pentagram can be used for getting rid of toxic energy, this is because it draws on the power of a specific element & its properties, i.e., the cleansing power of water to where it’s needed.